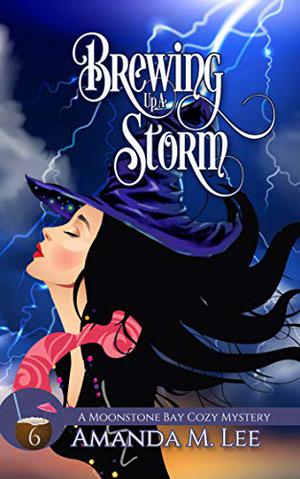 Brewing Up a Storm (Moonstone Bay #6)

Storm season has hit Moonstone Bay and with it comes a whole lot of trouble.
Hadley Hunter thinks she’s ready for what’s to come, but she’s not. Before the storms can wreak havoc on her life, though, she has something even more frightening to deal with … lunch with her boyfriend Galen Blackwood’s mother.
Despite her best intentions, things don’t go as smoothly as Hadley envisioned. Before she has a chance to deal with that, though, the storms bring another surprise in the form of an unconscious woman on the beach and a yacht that keeps appearing (and then disappearing) with each subsequent storm.
Hadley can’t wrap her head around what’s happening, especially when news breaks regarding the identity of the individual who was found in front of the lighthouse. It seems she’s the wife of a very rich and powerful man … who disappeared a year before. In addition to that, the couple had two daughters with them at the time their boat fell off the map. What happened to them?
It’s a race against time for Hadley and her motley band of paranormal friends. They must find the yacht and uncover every horrible secret one family has managed to bury beneath a deep blue sea … and they have to do it with a monster on their tails.
At the heart of almost every family is love. At the heart of this one is despair. Somehow, Hadley will have to overcome her worst fears to become the best witch she possibly can.
Here’s hoping she’s up to the challenge.
more
Bookmark Rate Book
Amazon Other stores
As an Amazon Associate bookstream.io earns from qualifying purchases

Similar books to 'Brewing Up a Storm'

Buy 'Brewing Up a Storm' from the following stores: