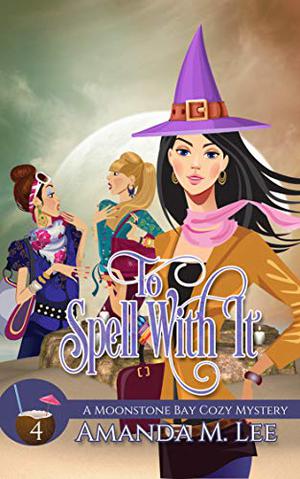 To Spell with It (Moonstone Bay #4)

Hadley Hunter thinks she’s seen everything – okay, maybe not everything but a lot of things – but she’s never seen a cupid convention.
When her good friend Booker’s fellow cupids descend on Moonstone Bay, she thinks it’s going to be fun and games. Instead, it’s mayhem and mystery when a rash of suicides and attempted suicides hit random island residents.
That means it’s off to the races to solve another mystery.
Hadley has been doing a lot of thinking about her life. She wants a career, not a job. She also wants to uncover a murderer. Even though her boyfriend Galen tries to keep her out of the case, she’s bound and determined to be in the thick of things.
Galen’s fears come to fruition when something starts calling to Hadley in her dreams and he’s convinced whatever creature convinced the others to try to kill themselves is now after Hadley.
Between egocentric cupids who are at war with each other, a big mystery regarding the origin of some of Hadley’s favorite paranormal friends, and her own determination, Hadley isn’t giving up without answers.
She’s used to having magical backup at every turn. This time, she’s going to have to fight the ultimate battle alone.
Is she up to the challenge? She’d better be. Everyone she loves is in danger and she’s the only one who can save them.
It’s time to witch up … and she’s ready.
more
Bookmark Rate Book
Amazon Other stores
As an Amazon Associate bookstream.io earns from qualifying purchases

Similar books to 'To Spell with It'

Buy 'To Spell with It' from the following stores: