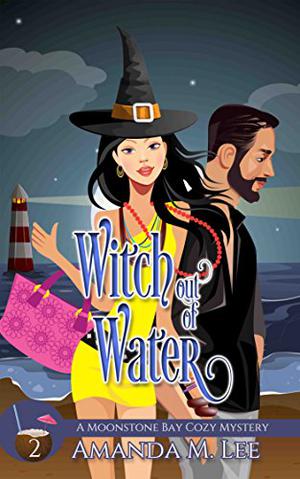 Witch Out of Water (Moonstone Bay #2)

Hadley Hunter is the new witch in a town overflowing with paranormal beings. She’s ready to settle, but odd things keeping cropping up and knocking her off her game.
In addition to dating Moonstone Bay’s sheriff Galen Blackwood, Hadley has her hands full when she helps discover a body at a local festival and uncovers a decades’ old feud between two warring families.
The stories are flying fast and furious and the suspects are racking up. At the top of the list is local enigma Booker, a mysterious soul who Hadley is determined to chase until he starts giving answers about his hidden past.
Galen and Booker are at odds – and it’s over more than just the dead body – and Hadley feels caught in the middle. When another witch shows an interest in her magical development, Hadley is eager for a breather. Unfortunately for her, the old witch in town might not be on the up and up.
Hadley has a lot to do. She needs to solve a murder, figure out what’s up with the other witch and get to know a few more locals. That’s on top of bonding with a grandfather she didn’t even know she had. She doesn’t have a job but she’s always working at something … as long as she survives to see another fantastic island sunrise, that is.
more
Bookmark Rate Book
Amazon Other stores
As an Amazon Associate bookstream.io earns from qualifying purchases

Similar books to 'Witch Out of Water'

Buy 'Witch Out of Water' from the following stores: