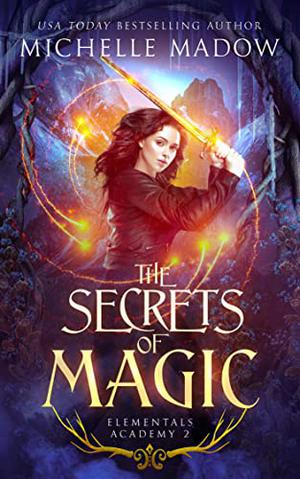 The Secrets of Magic (Elementals Academy #2)

There are only so many secrets you can keep before you break.

A few weeks ago, Summer Donovan learned she’s a witch descended from the Greek gods. She was whisked away to an academy for witches to learn how to use the element she controls—air.

Except Summer doesn’t have air magic. Instead, she controls metal and gems—an ability no witch has demonstrated before.

The headmistress of the school has a theory—she suspects Summer is the first known witch descended from the god of the Underworld, Hades.

As if not knowing her magical heritage isn’t troublesome enough, Summer discovers she’s soulmates with the most mysterious guy at the school—Zane Caldwell. But Zane’s been keeping a secret of his own. He’s an immortal, and his heritage isn’t Greek. It’s Norse. He infiltrated the academy two years ago to spy on the Greeks, and now Summer has to make a choice: reveal the truth about Zane and risk his life, or keep his secret and turn on her people.

Because the Norse gods are rising. When they do, it’s going to be all-out war.

And Summer will eventually have to pick a side.
more
Bookmark Rate Book
Amazon Other stores
As an Amazon Associate bookstream.io earns from qualifying purchases

Similar books to 'The Secrets of Magic'

Buy 'The Secrets of Magic' from the following stores: