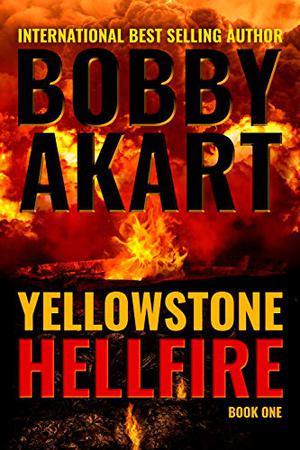 Yellowstone is controlled by nature.
Its beauty is breathless and tranquil.
Crystal clear streams flow.
Buffalo roam freely.
It's what's happening beneath that will bring HELLFIRE!
The Yellowstone Series, a new disaster thriller from critically acclaimed author, Bobby Akart, takes the reader on a thrill ride as a cataclysmic event of extinction level proportions ticks away like a time bomb, awaiting its moment. Millions of people visit the Yellowstone National Park every year blissfully unaware they are on top of the greatest killer man has ever known - the Yellowstone Supervolcano.
Beneath this primal allure simmers a catastrophic threat. A caldera the size of Mount Everest, created hundreds of thousand of years ago, which holds back super-heated magma, rising and falling, looking for release.
Scientists agree, the eruption of the Yellowstone supervolcano is long overdue. Events have been set into motion that lit the fuse of the greatest disaster mankind has ever known.
Is it going to happen? Yes.
Do we know when? Anytime, or not within our lifetime, hopefully.
But if it does ... The eruption of the Yellowstone supervolcano will be more than a spectacle to grab our attention. It will be the end of the world as we know it.

ABOUT THE YELLOWSTONE SERIES
Volcanoes are the Earth's way of letting off steam. While most people look at volcanic eruptions as natural disasters, the fact of the matter is, without them, the Earth would explode. Deep beneath the surface of the planet, excess heat builds up, finding a way to vent. Like an overcrowded bus on a hot summer day, the overheated magma stews in its own madness, allowing pent-up frustrations to boil over, until it releases its fury - its HELLFIRE - upon the world above.
Yellowstone is the most potentially explosive, violent, deadly, active volcano on our planet and scientists agree, a catastrophic eruption is inevitable. Yellowstone is extraordinary in its potential and is quite simply, Earth's greatest killer. You've been warned.
more
Bookmark Rate Book
Amazon Other stores
As an Amazon Associate bookstream.io earns from qualifying purchases

All books by Bobby Akart  ❯