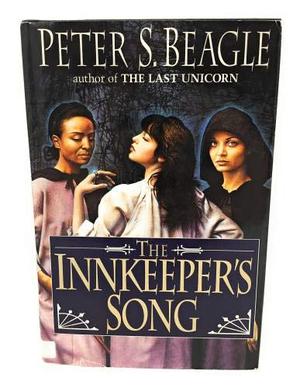 The Innkeeper’s Song is the story of young Tikat’s search for the lover whose death and resurrection he witnessed. It is a search that will lead him into a world of magic and mystery beyond his comprehension, for his wild ride sets him on the trail of three women who are blessed—or cursed—to undertake an impossible mission of their own.

Each of the three has secrets—from the world, from the two others, from herself. Each is followed by demons she can never escape. And all their destinies will be irrevocably linked in a far distant inn, when hunted and hunters finally meet. Karsh, the innkeeper, has no choice but to let the tangled drama unfold beneath his roof; his stable boy, Rosseth, is so mesmerized by the three cloaked women that he is soon finds a way to uncover what is perhaps their deepest secret; and Tikat continues his journey, refusing to let death bring an end to his love.

But it is not until the once-powerful man who has called the three women joins their number that the true quest will begin. And this is a challenge that may claim all their lives before they are done. For he who has been their mentor in the past, he who has been the greatest of wizards, lingers now at the very edge of death. And only they can save him from the enemy who has brought this doom upon him, an enemy who is heir to all the ailing man’s magic, an enemy whom even Death has not been able to defeat…
more
Bookmark Rate Book
Amazon Other stores
As an Amazon Associate bookstream.io earns from qualifying purchases

Similar books to 'The Innkeeper's Song'

Buy 'The Innkeeper's Song' from the following stores: