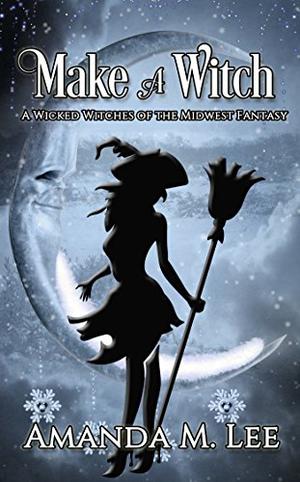 Make A Witch (Wicked Witches of the Midwest #3)

Bay Winchester and Landon Michaels are looking forward to a quiet holiday. It seems someone else has other ideas.
Hemlock Cove is buzzing with activity – and very little of it has to do with Thanksgiving.

The town is christening a new wishing well – dedicated by Mrs. Little herself – and Landon and Bay are eager to attend the unveiling. In truth, Landon is in it for the doughnuts and hot chocolate, but Bay is dedicated to covering the event in the best possible way.

In quick succession, weird things start happening around Hemlock Cove (yes, even weirder than normal). The town tutor is walking around with his own personal harem, there’re rumors that a woman is holding a Star Trek actor in her home a few blocks away and Mrs. Little is now the most popular woman in town. That’s on top of the fact that Bay is convinced she saw a human being flying over Aunt Tillie’s pot field and a pair of elderly Overlook guests can’t stop mauling each other in public places.

Bay figures out what’s going on … and it all comes back to that wishing well. It seems Aunt Tillie wanted to teach Mrs. Little a lesson and it backfired (of course). It’s up to Bay, Landon and the rest of the Winchester family to stop the mayhem before it spreads, and to track down everyone who made a wish and force them to reverse it.

It’s all hands on deck for another crazy adventure. And, along the way, they might just learn something about themselves … that is if they survive the madcap wishes and Mrs. Little’s wrath, of course.
more
Bookmark Rate Book
Amazon Other stores
As an Amazon Associate bookstream.io earns from qualifying purchases

Similar books to 'Make A Witch'

Buy 'Make A Witch' from the following stores: