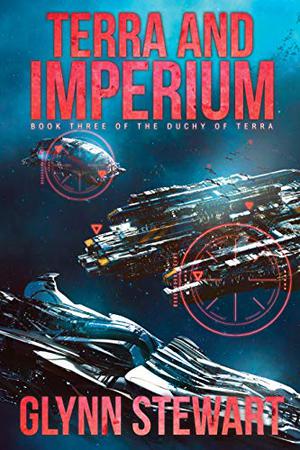 Terra and Imperium (Duchy of Terra #3)

Secrets both ancient and new.
Powers great and greater—
With Terra caught in the middle

Humanity’s first colony is a project neither the Duchy of Terra nor the A!Tol Imperium can allow to fail. The planet Hope in the Alpha Centauri system has been lavished with resources and attention—but when an unknown alien force attacks the system, all of that is in danger.

An ancient alien artifact is the apparent target of the attack, an artifact older than known galactic civilization. Suddenly, the backwater colony of a second-rate power is the gathering point for a confrontation of the galaxy’s greatest powers.

Duchess Annette Bond might be pregnant. She might be five light years away. She might have another galactic power on her doorstep demanding she surrender their rebels who’ve settled on Earth.

But she speaks for both Terra and the Imperium—and the galaxy will listen.
more
Bookmark Rate Book
Amazon Other stores
As an Amazon Associate bookstream.io earns from qualifying purchases

The 'Duchy of Terra' series

Similar books to 'Terra and Imperium'

Buy 'Terra and Imperium' from the following stores: