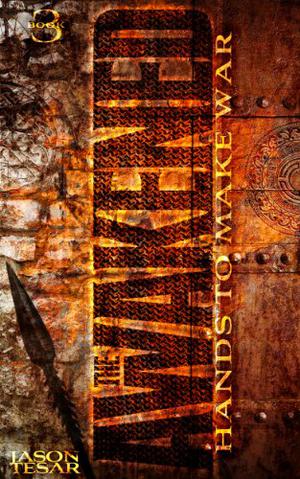 Hands To Make War (The Awakened #3)

AAfter fighting his way back from a paralyzing defeat, Kael resolves to bring an end to the enemies of the Orudan Empire. Enlisting the help of his family and most-trusted friends, he faces off against an ancient evil and embraces his destiny.

As Maeryn rises through the ranks to attain a command position within the Resistance, she learns of a conspiracy in her organization and realizes the enormous resources at her disposal. Determined to set things right, she seizes control and sets a new course for the movement.

Reacquainting with his closest friends, Saba pieces together the identity and motive of the enemy. Bringing his vast knowledge to bear, he collaborates with Orud’s High Council to force the enemy into the open, while waiting to reveal a secret of his own.

Working to establish communications with the mysterious organization protecting him, Adair sets in motion a plan that he hopes will enable him to return to his world—and his family.

In book three of the Amazon bestselling series, Jason Tesar’s epic saga shatters the barrier between ancient and modern worlds, hurtling toward earth’s post-apocalyptic future as it blends the genres of fantasy, sci-fi, and military/political suspense.
more
Bookmark Rate Book
Amazon Other stores
As an Amazon Associate bookstream.io earns from qualifying purchases

The 'The Awakened' series

All books by Jason Tesar  ❯

Buy 'Hands To Make War' from the following stores: