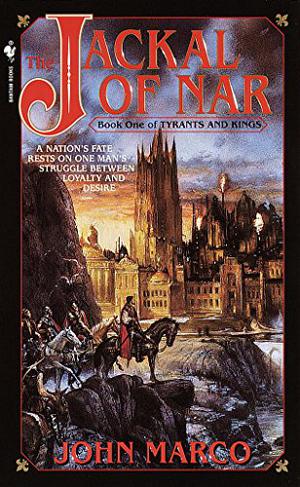 The Jackal of Nar (Tyrants and Kings #1)

This masterful debut of a military fantasy series probes the emotional landscapes and moral dilemmas of a reluctant warrior, the brave yet sensitive General Richius Vantran. Ordered by the Emperor to halt a revolt by a religious faction, Vantran's success wins him both Imperial favor and a wife--though neither sits well with him. For in battle, he fell in love with a member of the very religious faction he put down. Torn between duty and passion, Vantran surprises himself by choosing to love the enemy--and march against his old companions.
more
Bookmark Rate Book
Amazon Other stores
As an Amazon Associate bookstream.io earns from qualifying purchases

The 'Tyrants and Kings' series

Similar books to 'The Jackal of Nar'

Buy 'The Jackal of Nar' from the following stores: