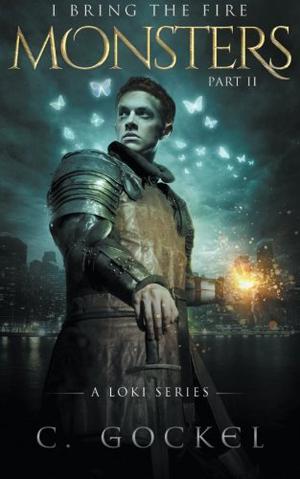 Monsters (I Bring the Fire #2)

After being attacked by a serial killer, saved by Loki — so-called God of Mischief, Lies and Chaos — dragged to Alfheim, losing every cent in her bank account, and caring for her grandmother, Amy Lewis has lost her scholarship to veterinary school. But it’s alright. She has a plan. If she manages to keep her day job as a receptionist, and her night job as a vet tech, she may be able to get her scholarship reinstated and save enough money for the dreaded ‘miscellaneous fees.’

Too bad her day boss is unbearable...

Agent Steve Rogers has political aspirations, but when a suitcase nuke turns out to be something much worse and so-called Norse gods start showing up in his life, he has a priority shift.

Meanwhile, Loki’s priorities and plans haven’t changed at all. He wants Asgard to burn. Of course, earthly pleasures can be so distracting.

These three disparate characters have little in common, but they’ll have to join forces to save earth from trolls, wyrms, frost giant invasions, and an old evil growing beneath Chicago’s streets.

In this second volume of “I Bring the Fire,” chaos comes to our world and decides to stay. The nine realms will never be the same.
more
Bookmark Rate Book
Amazon Other stores
As an Amazon Associate bookstream.io earns from qualifying purchases

The 'I Bring the Fire' series

Buy 'Monsters' from the following stores: