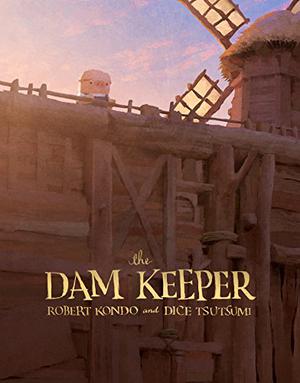 Life in Sunrise Valley is tranquil, but beyond its borders lies certain death. A dangerous black fog looms outside the village, but its inhabitants are kept safe by an ingenious machine known as the dam. Pig’s father built the dam and taught him how to maintain it. And then this brilliant inventor did the unthinkable: he walked into the fog and was never seen again.

Now Pig is the dam keeper. Except for his best friend, Fox, and the town bully, Hippo, few are aware of his tireless efforts. But a new threat is on the horizon—a tidal wave of black fog is descending on Sunrise Valley. Now Pig, Fox, and Hippo must face the greatest danger imaginable: the world on the other side of the dam.

Based on the Oscar-nominated animated short film of the same name, The Dam Keeper is a lush, vibrantly drawn graphic novel by Tonko House cofounders Robert Kondo and Dice Tsutsumi.
more
Bookmark Rate Book
Amazon Other stores
As an Amazon Associate bookstream.io earns from qualifying purchases

Similar books to 'The Dam Keeper'

Buy 'The Dam Keeper' from the following stores: