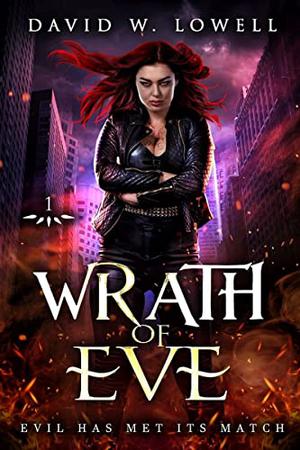 WRATH OF EVE: Evil Has Met Its Match

Eve is an 18-year-old spitfire in the Garden of Eden with an inverted moral compass and a comedically twisted view of the world.
After having discovered a great truth about the universe from Satan, who calls himself Serpent, she decides to sneak into higher realms of consciousness and wants him to join her. He agrees, but part of the deal is that Eve reincarnates on Earth to perform a task for him first. After this last hurrah, which takes place in the ancient colony of Atlantis, he'll gladly join her. However, her assignment ends up causing all of human civilization a tremendous amount of suffering.
Despite fulfilling her end of the bargain, Serpent reneges on his promise. Feeling betrayed, Eve reincarnates on Earth once again, only this time seeking to serve God rather than Serpent. By this point on Earth, a powerful secret society has taken control of the world, and Eve will need the help of her human father to expose the group by hacking into worldwide media conglomerates.
She should be cautious though because the people she has hurt in the past will show up now to torment her. Will she succeed in trying to expose the secret society? And will she ever be able to fully abandon Serpent, or will she seek vengeance against him for tricking her? [Contains some graphic violence, no romance].
more
Bookmark Rate Book
Amazon Other stores
As an Amazon Associate bookstream.io earns from qualifying purchases

Similar books to 'WRATH OF EVE: Evil Has Met Its Match'

More books like 'WRATH OF EVE: Evil Has Met Its Match'   ❯

Buy 'WRATH OF EVE: Evil Has Met Its Match' from the following stores: