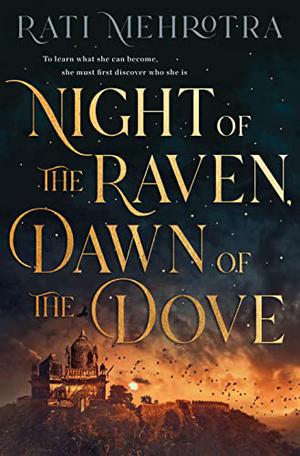 Night of the Raven, Dawn of the Dove

To learn what she can become, she must first discover who she is.

Katyani’s role in the kingdom of Chandela has always been clear: becoming an advisor and protector of the crown prince, Ayan, when he ascends to the throne. Bound to the Queen of Chandela through a forbidden soul bond that saved her when she was a child, Katyani has grown up in the royal family and become the best guardswoman the Garuda has ever seen. But when a series of assassination attempts threatens the royals, Katyani is shipped off to the gurukul of the famous Acharya Mahavir as an escort to Ayan and his cousin, Bhairav, to protect them as they hone the skills needed to be the next leaders of the kingdom. Nothing could annoy Katyani more than being stuck in a monastic school in the middle of a forest, except her run-ins with Daksh, the Acharya’s son, who can’t stop going on about the rules and whose gaze makes her feel like he can see into her soul.

But when Katyani and the princes are hurriedly summoned back to Chandela before their training is complete, tragedy strikes and Katyani is torn from the only life she has ever known. Alone and betrayed in a land infested by monsters, Katyani must find answers from her past to save all she loves and forge her own destiny. Bonds can be broken, but debts must be repaid.
more
Bookmark Rate Book
Amazon Other stores
As an Amazon Associate bookstream.io earns from qualifying purchases

Similar books to 'Night of the Raven, Dawn of the Dove'

More books like 'Night of the Raven, Dawn of the Dove'   ❯

All books by Rati Mehrotra  ❯

Buy 'Night of the Raven, Dawn of the Dove' from the following stores: