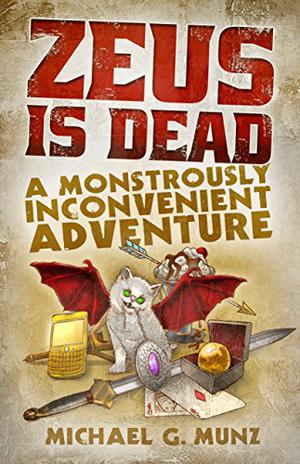 Zeus Is Dead: A Monstrously Inconvenient Adventure (Zeus is Dead #1)

THE GODS ARE BACK. DID YOU MYTH THEM?

You probably saw the press conference. Nine months ago, Zeus's murder catapulted the Greek gods back into our world. Now they revel in their new temples, casinos, and media empires—well, all except Apollo. A compulsive overachiever with a bursting portfolio of godly duties, the amount of email alone that he receives from rapacious mortals turns each of his days into a living hell.

Yet there may be hope, if only he can return Zeus to life! With the aid of Thalia, the muse of comedy and science fiction, Apollo will risk his very godhood to help sarcastic TV producer Tracy Wallace and a gamer-geek named Leif—two mortals who hold the key to Zeus's resurrection. (Well, probably. Prophecies are tricky buggers.)

Soon an overflowing inbox will be the least of Apollo’s troubles. Whoever murdered Zeus will certainly kill again to prevent his return, and avoiding them would be far easier if Apollo could possibly figure out who they are.

Even worse, the muse is starting to get cranky.

Discover a world where reality TV heroes slay actual monsters and the gods have their own Twitter feeds: Zeus Is Dead: A Monstrously Inconvenient Adventure!
more
Bookmark Rate Book
Amazon Other stores
As an Amazon Associate bookstream.io earns from qualifying purchases

The 'Zeus is Dead' series

Similar books to 'Zeus Is Dead: A Monstrously Inconvenient Adventure'

Buy 'Zeus Is Dead: A Monstrously Inconvenient Adventure' from the following stores: