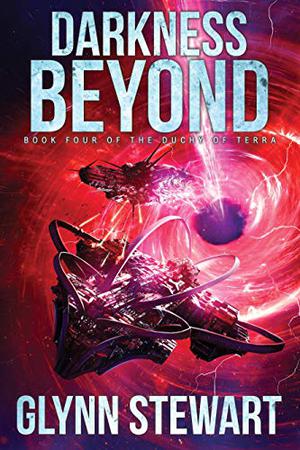 Darkness Beyond (The Light of Terra #1)

The A!Tol Imperium and their new human subjects have had fifteen years of relative peace. New colonies have been founded, new worlds explored, new ships built. Formal and informal alliances have been built with the ancient powers of the Core, leaving humanity and the Imperium seemingly on the brink of a new dawn.

The devastation of one of the newly-founded human colonies sends ripples of shock through the Imperium, and a battle fleet under Fleet Lord Harriet Tanaka is dispatched to the edge of the Imperium to find the culprits and bring them to justice.

Meanwhile, the destruction of a Mesharom Frontier Fleet squadron calls the Duchy of Terra’s newest warship, Bellerophon, into action and combat with a strange new power that bears all the signs of the Imperium’s age-old enemy, the Kanzi.

Aboard Bellerophon is Annette Bond’s stepdaughter, Morgan Casimir. The recently promoted junior officer will be thrust into the crucible of war and challenged to rise to her mother’s example in the face of this both new and ancient enemy…
more
Bookmark Rate Book
Amazon Other stores
As an Amazon Associate bookstream.io earns from qualifying purchases

The 'The Light of Terra' series

Similar books to 'Darkness Beyond'

Buy 'Darkness Beyond' from the following stores: