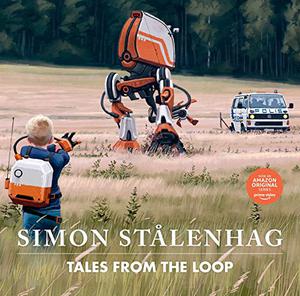 In 1954, the Swedish government ordered the construction of the world’s largest particle accelerator. The facility was complete in 1969, located deep below the pastoral countryside of Mälaröarna. The local population called this marvel of technology The Loop. These are its strange tales.

Simon Stålenhag’s paintings of Swedish 1980s suburbia, populated by fantastic machines and strange beasts, have spread like wildfire on the Internet. The 2015 Kickstarter for the English version of the book raised over $320,000. Stålenhag’s portrayal of a childhood against a backdrop of old Volvo cars and coveralls, combined with strange and mystical machines, creates a unique atmosphere that is both instantly recognizable and utterly alien.

In this top-quality artbook, Simon Stålenhag’s first set of paintings are collected in book form—together with texts that tell the stories of the youth who lived in the shadows of the machines. In addition, three separate prints (format 260×230 mm) as well as a full-color map (format 520x340mm) of the land of The Loop are included in the book.
more
Bookmark Rate Book
Amazon Other stores
As an Amazon Associate bookstream.io earns from qualifying purchases

The 'Tales from the Loop, Things from the Flood, The Electric State' series

Similar books to 'Tales from the Loop'

All books by Simon Stålenhag  ❯

Buy 'Tales from the Loop' from the following stores: