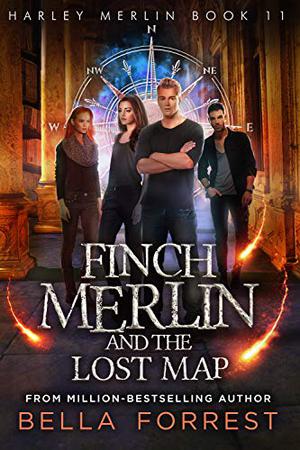 Magical mapmaking is an ancient art—and also a major pain.

At least, Finch can’t help but feel that way, since Erebus transported him to the Mapmakers’ Monastery with little to no instructions. Now, he’s stranded on some Greek island until he can learn how to draw maps to places he thought only existed in legends, like El Dorado and Shangri-La.

Only the worthiest of magicals can attain such a rare skill. The weak are weeded out through nearly impossible tests that involve mind-bending poisons, weird plants, and… pottery-making?

But Finch isn’t the only one looking to learn the art of mapmaking. Magicals from all over the world are drawn to the Monastery. As Finch encounters both greedy treasure hunters and knowledge-hungry explorers, he must decide who is trustworthy and who has more sinister intentions.

When Erebus knocks on her door, Kenzie is roped into delivering secret messages to Finch using her ability to Morph into the bodies of animals. In exchange, the God of Darkness will reveal what she wants most: to find the lowlife who cursed her mother.

Both Finch and Kenzie know they’re pawns in Erebus’s long game—but to what end?

*Beware of spoilers in the reviews below that are without spoiler alerts.*
more
Bookmark Rate Book
Amazon Other stores
As an Amazon Associate bookstream.io earns from qualifying purchases

Similar books to 'Finch Merlin and the Lost Map'

More books like 'Finch Merlin and the Lost Map'   ❯

All books by Bella Forrest  ❯

Buy 'Finch Merlin and the Lost Map' from the following stores: