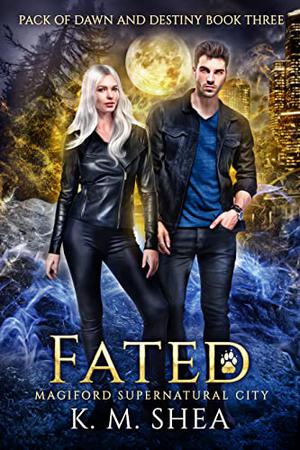 Fated (Pack of Dawn and Destiny #3)

I thought I hated not fitting in. Turns out I hate having a target on my back even more.

Someone wants me taken out. To accomplish that, they leaked the secret of my magic to all the Packs in the Midwest. Now, almost every Alpha in the region has traveled to my hometown in hopes of convincing me to join their Pack.

And some of them don’t seem to think I should have a choice.

Greyson won’t stand for that—something he makes deadly clear to the other Alphas. What they don’t know is that I’m his long missing mate. But wolves and hunters are enemies, and my hunter magic blocks me from accepting the bond…even though I’m starting to wish I could.

Our incomplete mate bond is a constant drain on Greyson. Its existence puts him in danger—something he stubbornly ignores.

But as risky as our bond is, I have to stay focused on the biggest threat at the moment.

Whoever shared the secret of my powers wants to destroy our Pack. And we’re about to find out how far they’ll go to make that happen.

Fated is the final book in the Pack of Dawn and Destiny urban fantasy trilogy and is part of the Magiford Supernatural City world. It features werewolves, hunters, and fae, and is filled with humor, adventure, and a sweet romance that will have you laughing outloud.
more
Bookmark Rate Book
Amazon Other stores
As an Amazon Associate bookstream.io earns from qualifying purchases

The 'Pack of Dawn and Destiny' series

Buy 'Fated' from the following stores: