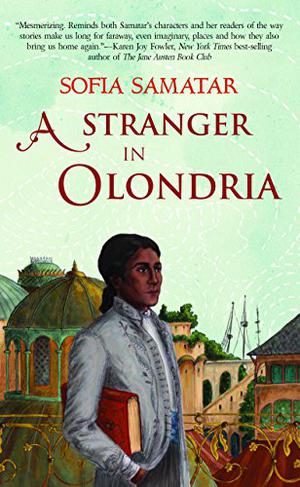 A Stranger in Olondria

Jevick, the pepper merchant’s son, has been raised on stories of Olondria, a distant land where books are as common as they are rare in his home—but which his mother calls the Ghost Country.

When his father dies and Jevick takes his place on the yearly selling trip to Olondria, Jevick’s life is as close to perfect as he can imagine. Just as he revels in Olondria’s Rabelaisian Feast of Birds, he is pulled drastically off course and becomes haunted by the ghost of an illiterate young girl.

In desperation, Jevick seeks the aid of Olondrian priests and quickly becomes a pawn in the struggle between the empire’s two most powerful cults.

Even as the country simmers on the cusp of war, he must face his ghost and learn her story before he has any chance of freeing himself by setting her free: an ordeal that challenges his understanding of art and life, home and exile, and the limits of that most seductive of necromancies, reading.
more
Bookmark Rate Book
Amazon Other stores
As an Amazon Associate bookstream.io earns from qualifying purchases

Similar books to 'A Stranger in Olondria'

Buy 'A Stranger in Olondria' from the following stores: