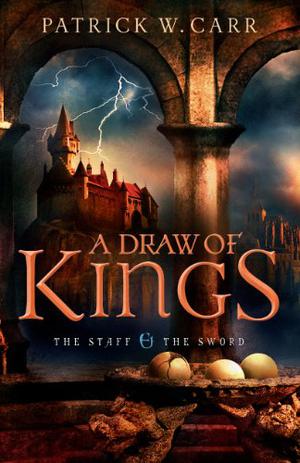 A Draw of Kings (The Staff and the Sword #3)

Their journey to Merakh should have made Errol and his companions heroes of the realm. Instead, much is changed on their return. In the wake of the king’s death, Duke Weir is ruling the country–and his intentions are to marry Adora to bring an heir.
With Errol and the others imprisoned and the identity of the rightful heir to the throne still hidden in secrecy, Illustra is on the verge of civil war–and at growing risk from the armies of Merakh and Morgol.
A dangerous mission to free Errol succeeds, but the dangers facing the kingdom are mounting with every passing moment. The barrier has fallen, ferals are swarming toward the land, and their enemies draw near. Will the revelation of Illustra’s next true king come in time or will all be lost?
more
Bookmark Rate Book
Amazon Other stores
As an Amazon Associate bookstream.io earns from qualifying purchases

The 'The Staff and the Sword' series

Similar books to 'A Draw of Kings'

Buy 'A Draw of Kings' from the following stores: