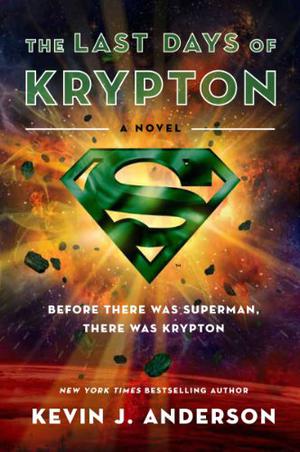 The Last Days of Krypton

Before there was Superman...there was Krypton, a doomed world, and two parents who gave us their only son...

Everyone knows how Kal-El--Superman--was sent to Earth just before his planet exploded. But what led to such a disaster? Now, in The Last Days of Krypton, Kevin J. Anderson presents a sweeping tale of the pomp and grandeur, the intrigue and passion, and the politics and betrayals of a doomed world filled with brave heroes and cruel traitors.

Against the spectacular backdrop of Krypton's waning halcyon days, there is the courtship and marriage of Kal-El's parents, the brilliant scientist Jor-El and his historian wife, Lara. Together they fight to convince a stagnant, disbelieving society that their world is about to end. Jor-El's brother, Zor-El, leader of the fabled Argo City, joins the struggle not only to save the planet but also to fight against the menace of the ruthless and cunning General Zod.

The diabolical Zod, future archenemy of Superman, avails himself of a golden opportunity to seize power when the android Brainiac captures the capital city of Kandor. As Zod's grip on the populace tightens and his power grows, he too is blind to all the signs that point to the death of the very civilization he is trying to rule.

Through all of this, Jor-El and Lara's love for each other, their history, and their son allows for Krypton to live on even as the planet is torn apart around them. For in the escape of their baby lies Krypton's greatest gift--and Earth's greatest hero.

The Last Days of Krypton is a timeless, groundbreaking exploration of a world that has never been fully defined, and reveals the extraordinary origins of a legend that has never ceased to amaze and astound generation after generation.
more
Bookmark Rate Book
Amazon Other stores
As an Amazon Associate bookstream.io earns from qualifying purchases

Similar books to 'The Last Days of Krypton'

More books like 'The Last Days of Krypton'   ❯

Buy 'The Last Days of Krypton' from the following stores: