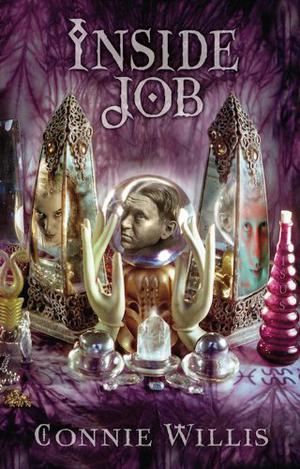 Professional debunker Rob, proprietor of the Jaundiced Eye magazine, considers himself incredibly lucky to have Kildy as his sole employee. Smart, dedicated, gorgeous, and, thanks to her last movie before she hung up on Hollywood, rich, she's a pleasure to oblige when she says Rob has to witness this channeler Ariaura's act--on her, not the Eye's, nickel--despite channelers being so last year. It's quite a show, all right, for in the midst of Ariaura's particular ancient wise guy's basso spiel, a gravelly baritone interrupts (both voices emanate from the channeler's female mouth) to berate the audience as "yaps" and the act as "claptrap." Why is Ariaura undermining herself? Or is she? After all, she angrily accuses Rob and Kildy of scheming to destroy her. Could the baritone belong to a genuine channeled spirit? Willis, one of sf's most spirited writers, rounds on the New Age; pays tribute to a great, skeptical journalist; and affectionately parodies pulp fiction at its best in this irresistible entertainment.
more
Bookmark Rate Book
Amazon Other stores
As an Amazon Associate bookstream.io earns from qualifying purchases

Similar books to 'Inside Job'

Buy 'Inside Job' from the following stores: