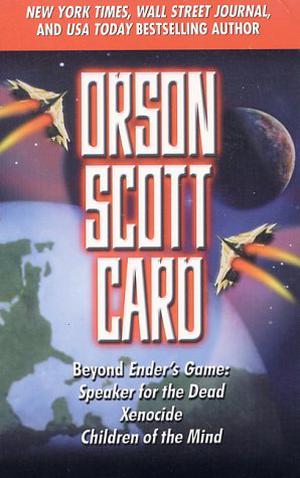 Beyond Ender's Game: Speaker for the Dead, Xenocide, Children of the Mind (Ender's Saga, #2-4)

Beyond Ender Boxed Set
Contains three mass market novels from Orson Scott Card: Speaker for the Dead, Xenocide and Children of the Mind

Now, long years later, a second alien race has been discovered, but again the aliens' ways are strange and frightening...again, humans die. And it is only the Speaker for the Dead, who is also Ender Wiggin the Xenocide, who has the courage to confront the mystery...and the truth.


Xenocide:
The war for survival of the planet Lusitania will be fought in the hearts of a child named Gloriously Bright.

On Lusitania, Ender found a world where humans and pequininos and the Hive Queen could all live together; where three very different intelligent species could find common ground at last. Or so he thought.

Lusitania also harbors the descolada, a virus that kills all humans it infects, but which the pequininos require in order to become adults. The Startways Congress so fears the effects of the descolada, should it escape from Lusitania, that they have ordered eh destruction of the entire planet, and all who live there. The Fleet is on its way, a second xenocide seems inevitable.


Children of the Mind:
The planet Lusitania is home to three sentient species: the Pequeninos; a large colony of humans; and the Hive Queen, brought there by Ender. But once against the human race has grown fearful; the Starways Congress has gathered a fleet to destroy Lusitania.

Jane, the evolved computer intelligence, can save the three sentient races of Lusitania. She has learned how to move ships outside the universe, and then instantly back to a different world, abolishing the light-speed limit. But it takes all the processing power available to her, and the Starways Congress is shutting down the Net, world by world.

Soon Jane will not be able to move the ships. Ender's children must save her if they are to save themselves.
more
Bookmark Rate Book
Amazon Other stores
As an Amazon Associate bookstream.io earns from qualifying purchases

Similar books to 'Beyond Ender's Game: Speaker for the Dead, Xenocide, Children of the Mind (Ender's Saga, #2-4)'

More books like 'Beyond Ender's Game: Speaker for the Dead, Xenocide, Children of the Mind (Ender's Saga, #2-4)'   ❯

Buy 'Beyond Ender's Game: Speaker for the Dead, Xenocide, Children of the Mind (Ender's Saga, #2-4)' from the following stores: