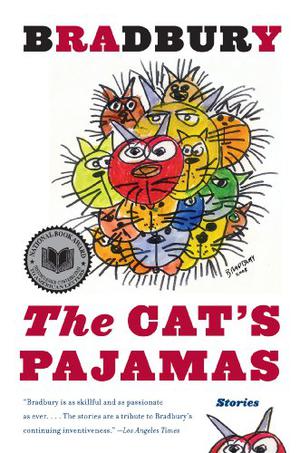 The Cat's Pajamas is an amazing journey through Ray Bradbury's illustrious six-decade career. Of the twenty-two stories collected here—some written recently, others decades ago—all but two have never before been published. Bradbury has crafted tales that are strange and scary, nostalgic and bittersweet, and humorous and touching, set in the not-so-distant past and an unknowable future: a group of senators drinks too much and gambles away the United States, a newly-wed couple buys an old house and finds their fledgling relationship tested, two mysterious strangers arrive at a rooming house and baffle their fellow occupants with strange crying in the night, and a lonely woman takes a last chance on love. The final piece is a story-poem, a fond salute from Bradbury to his literary heroes Shaw, Chesterton, Dickens, Twain, Poe, Wilde, Melville, and Kipling.

A timeless collection from one of America's greatest storytellers, The Cat's Pajamas is a panoramic view of Ray Bradbury's rich and remarkable imagination.

(from back cover)
more
Bookmark Rate Book
Amazon Other stores
As an Amazon Associate bookstream.io earns from qualifying purchases

Similar books to 'The Cat's Pajamas'

Buy 'The Cat's Pajamas' from the following stores: