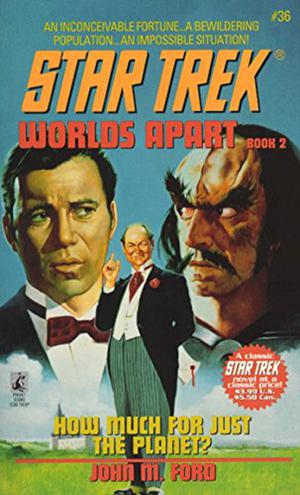 How Much for Just the Planet? (Star Trek: The Original Series #36)

Dilithium. In crystalline form, the most valuable mineral in the galaxy. It powers the Federation's starships... and the Klingon Empire's battlecruisers. Now on a small, out-of-the-way planet named Direidi, the greatest fortune in dilithium crystals ever seen has been found.

Under the terms of the Organian Peace Treaty, the planet will go to the side best able to develop the planet and its resources. Each side will contest the prize with the prime of its fleet. For the Federation--Captain James T. Kirk and the starship Enterprise. For the Klingons--Captain Kaden vestai-Oparai and the Fire Blossom.

Only the Direidians are writing their own script for this contest--a script that propels the crew of the Enterprise into their strangest adventure yet!
more
Bookmark Rate Book
Amazon Other stores
As an Amazon Associate bookstream.io earns from qualifying purchases

Similar books to 'How Much for Just the Planet?'

More books like 'How Much for Just the Planet?'   ❯

Aspects
Aspects
Apex Magazine Issue 61 (June 2014)
Apex Magazine Issue 61 (June 2014)
The Alchemy of Stars
The Alchemy of Stars
GURPS Infinite Worlds
GURPS Infinite Worlds
The Hand of Kahless
The Hand of Kahless
Heat of Fusion and Other Stories
Heat of Fusion and Other Stories
All books by John M. Ford  ❯

Buy 'How Much for Just the Planet?' from the following stores: