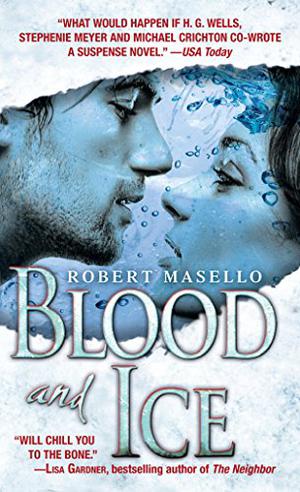 In this haunting and suspenseful thriller, Robert Masello delivers an adventure that spans continents and centuries—a spellbinding story that ranges from Victorian England to a remote antarctic research station, where an ancient glacier yields a shocking prize it has held captive for nearly two hundred years….

Journalist Michael Wilde—his world recently shattered by tragedy—hopes that a monthlong assignment to the South Pole will give him a new lease on life. Here, in the most inhospitable place on earth, he is simply looking to find solace . . . until, on a routine dive in to the polar sea, he unexpectedly finds something else entirely: a young man and woman, bound with chains and sealed forever in a block of ice. Beside them a chest filled with a strange, and sinister, cargo.

Now, in a bleak but breathtaking world of shimmering icebergs, deep blue crevasses, and never-ending sun, Wilde must unravel the mystery of this doomed couple. Were they the innocent victims of fear and superstition—or were they something far darker? His search will lead from the barracks and battlefields of the Crimean War to the unexplored depths of the Antarctic Ocean, from the ill-fated charge of the Light Brigade to an age-old curse that survives to this day.

As the ice around the murdered lovers begins to melt, Wilde will have to grapple with a miracle—or a nightmare—in the making. For what is dead, it turns out, may not be gone. And here, at the very end of the known world, there’s nowhere to hide and no place left for the living to run.
more
Bookmark Rate Book
Amazon Other stores
As an Amazon Associate bookstream.io earns from qualifying purchases

Similar books to 'Blood and Ice'

Buy 'Blood and Ice' from the following stores: