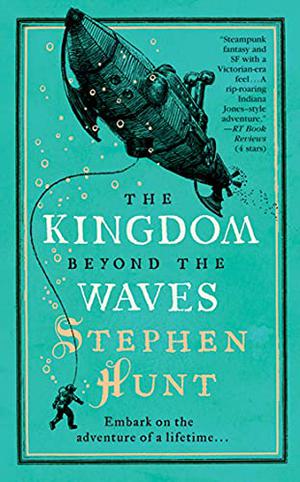 The Kingdom Beyond the Waves (Jackelian #2)

Professor Amelia Harsh is obsessed with finding the lost civilization of Camlantis, a legendary city from pre-history that is said to have conquered hunger, war, and disease with the creation of the perfect pacifist society. Without official funding, Amelia is forced to accept an offer of patronage from Abraham Quest, the man she blames for her father's bankruptcy and suicide. She hates him, but he has something that Amelia desperately wants--evidence that proves that Camlantis existed and that the Camlantean ruins are buried under one of the sea-like lakes that dot the murderous jungles of Liongeli.

Amelia will blackmail her old friend Commodore Black into ferrying her along a huge river on his ancient U-boat. With an untrusty crew of freed convicts, Quest's force of fearsome female mercenaries on board, and a lunatic steamman acting as their guide, Amelia's luck seems to be going from bad to worse. Her quest for the perfect society has a good chance of bringing her own world to the brink of destruction…

The Kingdom Beyond The Waves is Stephen Hunt's third novel, set in the same universe as The Court of the Air. Amelia Harsh is a female Indiana Jones if there ever was one, and this novel is a rollicking steampunk adventure that will hook readers for one dynamite ride.
more
Bookmark Rate Book
Amazon Other stores
As an Amazon Associate bookstream.io earns from qualifying purchases

Similar books to 'The Kingdom Beyond the Waves'

More books like 'The Kingdom Beyond the Waves'   ❯

All books by Stephen Hunt  ❯

Buy 'The Kingdom Beyond the Waves' from the following stores: