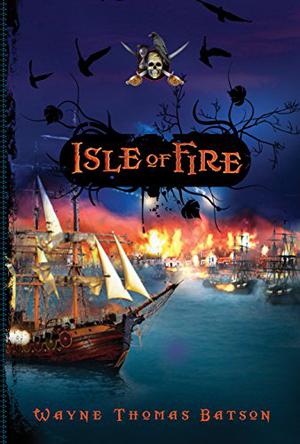 Brace yourself for a thrilling high-seas adventure and dare to set sail for the "Isle of Fire."

""A great explosion rocked the crowded harbor. Flaming debris screamed into the sky and then rained down into the burning water below. The ferocious blaze engulfed ship after ship expanding the circle of destruction in mere heartbeats. The fire rain had been unleashed.""
As Cat s memory returns, he realizes that he has lived two very different lives: One as the son of the ruthless Bartholomew Thorne; the other as the recipient of friendship and kindness from Declan Ross and the crew of the Robert Bruce. Now Cat must choose whether to return to the ways of his notorious father and join the evil Merchant, or defy the Merchant and risk his life to save his friends.
The best-selling "Isle of Swords" adventure continues in "Isle of Fire" as ancient mariners rise from legend and cut an all-too-real swath of destruction across the Atlantic. The newly formed Wolf Fleet scours the Caribbean, hunting the pirates they once called comrades. And in the pitiless winds of a monstrous hurricane, whole fleets will be blasted apart and devoured."
more
Bookmark Rate Book
Amazon Other stores
As an Amazon Associate bookstream.io earns from qualifying purchases

The 'Isle of Swords' series

Similar books to 'Isle of Fire'

Buy 'Isle of Fire' from the following stores: