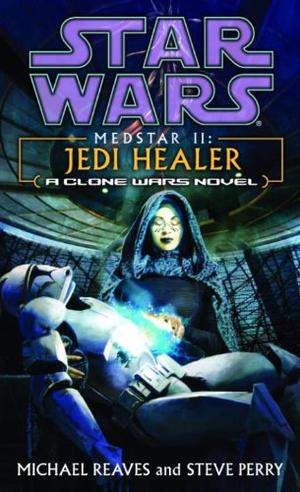 While the Clone Wars wreak havoc throughout the galaxy, the situation on the far world of Drongar is desperate, as Republic forces engage in a fierce fight with the Separatists. . . .

The threatened enemy offensive begins as the Separatists employ legions of droids into their attack. Even with reinforcements, the flesh and blood of the Republic forces are just no match for battle droids’ durasteel. Nowhere is this point more painfully clear than in the steaming Jasserak jungle, where the doctors and nurses of a small med unit face an impossible situation. As the dead and wounded start to pile up, surgeons Jos Vandar and Kornell “Uli” Divini know that time is running out.

Even the Jedi abilities of Padawan Barriss Offee have been stretched to the limit. Ahead lies a test for Barriss that could very well lead to her death–and that of countless others. For the conflict is growing–and for this obscure mobile med unit, there’s only one resolution. Shocking, bold, unprecedented, it’s the only option Jos and his colleagues really have. The unthinkable has become the inevitable. Whether it kills them or not remains to be seen.
more
Bookmark Rate Book
Amazon Other stores
As an Amazon Associate bookstream.io earns from qualifying purchases