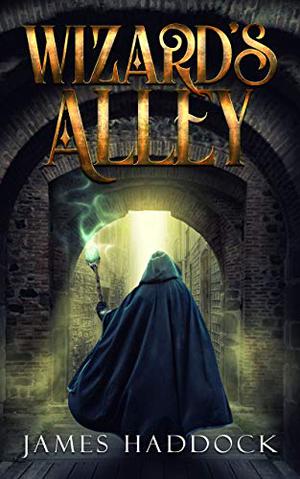 Scraps, a gutter child, is sitting in his hiding place in a back alley, waiting for the cold thunderstorm to pass. Suddenly, lightning strikes in front of him, and then a second time. The two lightning bolts become men—two wizards—one from the Red Order, the other from the Blue.
The Red Wizard, chanting his curses, throws lightning bolts and fireballs. The Blue Wizard, singing his spells, throws lightning bolts and ice shards. So intense is their fighting, they become lightning rods. It seemed as if God Himself cast His lightning bolt, striking the ground between them and consuming both wizards in its white blaze. Scraps watched as the lightning bolt gouged its way across the alley, striking him.
Rain on his face awakens Scraps. The only thing left of the fighting wizards is a smoking crater and their scattered artifacts. He feels compelled to gather their possessions and hide them and himself. The dispersed items glowed red or blue, and he notices that he now has a magenta aura. Magenta, a combination of both red and blue, but more powerful than either.
Scraps then does what he has done all his life to survive. He hides. And unknowingly, he has become the catalyst for change in the Kingdom.
more
Bookmark Rate Book
Amazon Other stores
As an Amazon Associate bookstream.io earns from qualifying purchases

All books by James Haddock  ❯