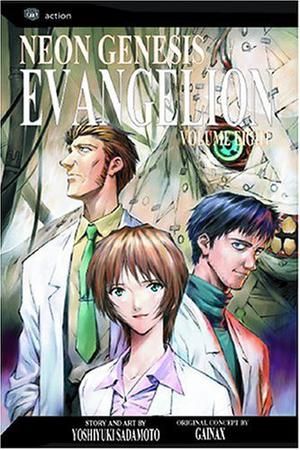 Japan's most controversial anime series is over...but not the manga version of Neon Genesis Evangelion Series co-creator Yoshiyuki Sadamoto's personal interpretation of the Evangelion characters and story is sure to intrigue new and old fans alike. In 2015, the "Angels" have returned, and Shinji Ikari, a fourteen year-old child of the new Earth, is forced by his father Gendo-commander of the secret organization NERV-to pilot the monstrous biomechanical weapon called "Evangelion" to match the Angels' fearsome power. As a disembodied Shinji drifts in visions, merged with the esoteric fluids of the Evangelion, his father's long-serving lieutenant, Fuyutsuki, is kidnapped for interrogation by SEELE-in German, the "Soul"-the council of superiors whom NERV has been double-crossing for some time now...One of the founding members of Gainax, Japan's most progressive anime studio, Evangelion's Yoshiyuki Sadamoto was also the character designer for their recent Adult Swim smash FLCL. EVA Vol. 8 contains a Japanese sound FX glossary plus a special bonus guide to help U.S. fans discover the best of the many import books available on Evangelion
more
Bookmark Rate Book
Amazon Other stores
As an Amazon Associate bookstream.io earns from qualifying purchases

All books by Yoshiyuki Sadamoto  ❯