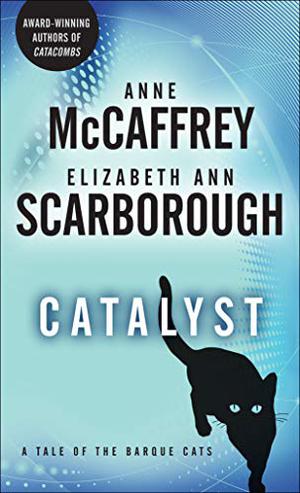 Catalyst (Tales of the Barque Cats #1)

Pilot, navigator, engineer, doctor, scientist--ship's cat? All are essential to the well-staffed space vessel. Since the early days of interstellar travel, when Tuxedo Thomas, a Maine coon cat, showed what a cat could do for a ship and its crew, the so-called Barque Cats have become highly prized crew members. Thomas's carefully bred progeny, ably assisted by humans--Cat Persons--with whom they share a deep and loving bond, now travel the galaxy, responsible for keeping spacecraft free of vermin, for alerting human crews to potential environmental hazards, and for acting as morale officers.
Even among Barque Cats, Chessie is something special. Her pedigree, skills, and intelligence, as well as the close rapport she has with her human, Janina, make her the most valuable crew member aboard the Molly Daise. And the litter of kittens in her belly only adds to her value.
Then the unthinkable happens. Chessie is kidnapped--er, catnapped--from Dr. Jared Vlast's vet clinic at Hood Station by a grizzled spacer named Carl Poindexter. But Chessie's newborn kittens turn out to be even more extraordinary than their mother. For while Chessie's connection to Janina is close and intuitive, the bond that the kitten Chester forms with Carl's son, Jubal, is downright telepathic. And when Chester is sent into space to learn his trade, neither he nor Jubal will rest until they're reunited.
But the announcement of a widespread epidemic affecting livestock on numerous planets throws their future into doubt. Suddenly the galactic government announces a plan to impound and possibly destroy all exposed animals. Not even the Barque Cats will be spared.
With the clock racing against them, Janina, Jubal, Dr. Vlast, and a handful of very special kittens will join forces with the mysterious Pshaw-Ra--an alien-looking cat with a hidden agenda--to save the Barque Cats, other animals, and quite possibly the universe as they know it from total destruction.
more
Bookmark Rate Book
Amazon Other stores
As an Amazon Associate bookstream.io earns from qualifying purchases

The 'Tales of the Barque Cats' series

Buy 'Catalyst' from the following stores: