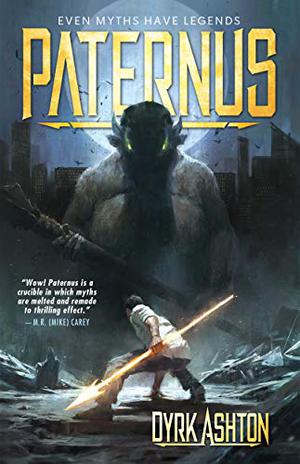 Described as American Gods meets The Avengers and Supernatural meets The Lord of the Rings, Paternus combines myths from around the world in a modern story of action and intrigue that is “urban fantasy on the surface, but so much more at its core!”

Even myths have legends. And not all legends are myth.

When a local hospital is attacked by strange and frightening men, Fiona Patterson and Zeke Prisco save a catatonic old man named Peter—and find themselves running for their lives with creatures beyond imagination hounding their every step.

With nowhere else to turn, they seek out Fi’s enigmatic Uncle Edgar. But the more their questions are answered, the more they discover that nothing is what it seems--not Peter, not Edgar, perhaps not even themselves.

The gods and monsters, heroes and villains of lore—they’re real. And now they’ve come out of hiding to hunt their own. In order to survive, Fi and Zeke must join up with powerful allies against an ancient evil that’s been known by many names and feared by all. The final battle of the world’s oldest war has begun.

Paternus: Rise of Gods, is Dyrk Ashton’s critically acclaimed debut novel and the first book in The Paternus Trilogy. It has been compared to works by Neil Gaiman, Scott Hawkins, Roger Zelazny, China Miéville, Joss Whedon, and Kevin Hearne.

Editions note: Earlier editions list the title as simply Paternus. These are the same book as Paternus: Rise of Gods.

Market: Adult to New Adult (as opposed to Teen or YA, though savvy 16 or 17 year olds might survive without permanent damage).
more
Bookmark Rate Book
Amazon Other stores
As an Amazon Associate bookstream.io earns from qualifying purchases

Similar books to 'Rise of Gods'

Art of War
Art of War
(The Faithful and the Fallen #4.5 The Greatest Battle)

All books by Dyrk Ashton  ❯

Buy 'Rise of Gods' from the following stores: