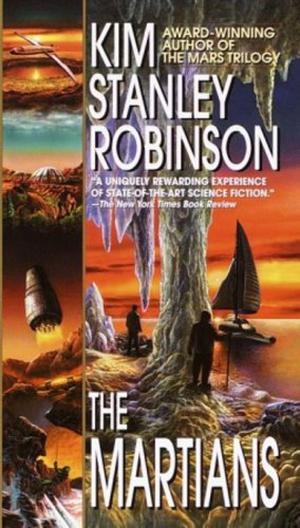 Robinson returns to the realm he has made his own, in a work that brilliantly weaves together a futuristic setting with a poetic vision of the human spirit engaged in a drama as ancient as mankind itself.

From a training mission in Antarctica to blistering sandstorms sweeping through labyrinths of barren canyons, the interwoven stories of The Martians set in motion a sprawling cast of characters upon the surface of Mars. As the planet is transformed from an unexplored and forbidding terrain to a troubled image of a re-created Earth, we meet the First Hundred explorers—men and women who are bound together by Earth’s tenuous toehold on Mars. Presenting unforgettable stories of hope and disappointment, of fierce physical and psychological struggles, The Martians is an epic chronicle of a planet that represents one of humanity’s most glorious possibilities.

The Martians is a unique collection of previously unpublished fiction, a fascinating addition to Robinson’s oeuvre, and a must for all lovers of the red planet.
more
Bookmark Rate Book
Amazon Other stores
As an Amazon Associate bookstream.io earns from qualifying purchases

Similar books to 'The Martians'

Buy 'The Martians' from the following stores: