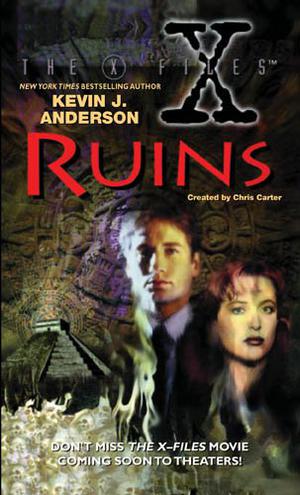 When a well-connected American archaeologist, Cassandra Rubicon, disappears while exploring the lost Mayan city of Xitaclan, the incident becomes a case for FBI agents Mulder and Scully. They are investigators assigned to the X-Files, the strange and inexplicable cases the FBI wants to keep hidden -- cases involving the paranormal, the supernatural, and possibly, the extraterrestrial.

Mulder thinks there may be more to this case than simply a missing team of scientists -- namely ancient curses, blood sacrifices, and deadly reptilian monsters lost in the jungles since before history.

Scully is, as always, more skeptical and likely to provide the logical explanations for her partner's unorthodox speculations. Meanwhile, a covert U.S. military commando team has been sent to investigate, and destroy, a strange electronic signal received from beneath the ruins -- a signal aimed upwards, at the stars...

The 'The X-Files' series

Buy 'Ruins' from the following stores: