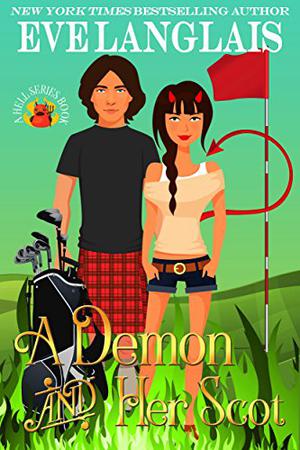 A Demon and Her Scot (Welcome to Hell #3)

An unlikely duo, the golfing match from Hell, and a devil determined to win, even if he has to cheat. Lucifer’s up to his matchmaking mischief again in this fast-paced, humorous jaunt into the bowels of the pit. Think you can handle the heat?

“Fetch me a Scot,” Lucifer commands. Sounds simple, except the skirt-wearing jerk won’t cooperate. But Aella isn’t one to give up. Willing or not, she delivers her target to the Lord of Sin. In retaliation, the much-too-sexy Scot has Aella assigned as his bodyguard for the golfing match from Hell.

The Welcome to Hell series (is best read in order for full enjoyment of Lucifer and his ongoing matchmaking attempts):
Book One: A Demon and His Witch
Book Two: A Demon and His Psycho
Book Two and a Half: Date with Death
Book Three: A Demon and Her Scot
more
Bookmark Rate Book
Amazon Other stores
As an Amazon Associate bookstream.io earns from qualifying purchases

Similar books to 'A Demon and Her Scot'

More books like 'A Demon and Her Scot'   ❯

Buy 'A Demon and Her Scot' from the following stores: