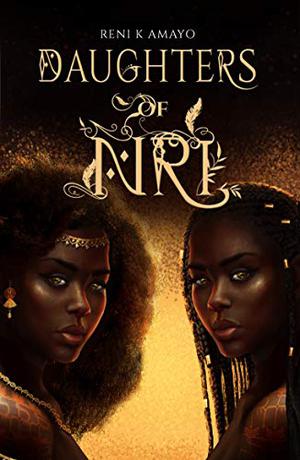 Daughters Of Nri (The Return of the Earth Mother #1)

A gruesome war results in the old gods' departure from earth. The only remnants of their existence lie in two girls. Twins, separated at birth. Goddesses who grow up believing that they are human. Daughters Of Nri explores their epic journey of self-discovery as they embark on a path back to one another.

Strong-willed Naala grows up seeking adventure in her quiet and small village. While the more reserved Sinai resides in the cold and political palace of Nri. Though miles apart, both girls share an indestructible bond: they share the same blood, the same face, and possess the same unspoken magic, thought to have vanished with the lost gods.

The twin girls were separated at birth, a price paid to ensure their survival from Eze Ochichiri, the man who rules the Kingdom of Nri. Both girls are tested in ways that awaken a mystical, formidable power deep within themselves. Eventually, their paths both lead back to the mighty Eze.

But can they defeat the man who brought the gods themselves to their knees?
more
Bookmark Rate Book
Amazon Other stores
As an Amazon Associate bookstream.io earns from qualifying purchases

The 'The Return of the Earth Mother' series

Similar books to 'Daughters Of Nri'

Buy 'Daughters Of Nri' from the following stores: