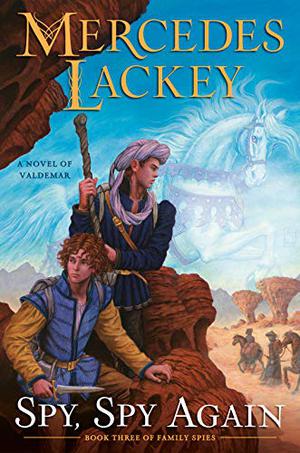 Now in paperback, the third novel of the Family Spies series, set in the bestselling world of Valdemar, where Heralds Mags and Amily's youngest child must follow in his parents' footsteps to protect both his family and the realm.

Thirteen year old Prince Kyril and Mags and Amily's fourteen-year-old son Tory share the Gift of Farsight--although neither of them are Chosen. They are self-trained, though currently, their shared Gift only allows them to see what is happening with their immediate family members.

After much debate, the Herald's Collegium has decided to test and train them anyway. That's when the surprises start. They do not share a single Gift; they have two complementary Gifts working together in a way that the Heralds have never seen before. Tory is the Farseer--Kee's Gift is to extend his range beyond a few dozen feet.

Their Gifts become crucial when Mags gets a desperate message from his cousin Bey, the head of the enigmatic assassin-tribe, the Sleepgivers. Bey's eldest daughter has been kidnapped, but he doesn't know why or by whom. He's calling in the debt Mags owes him to find his daughter before it's too late.

Tory is certain that if anyone can find her, he can. But that will mean traveling out of Valdemar into an unknown, dangerous country. And it will mean taking a Royal Prince with him.
more
Bookmark Rate Book
Amazon Other stores
As an Amazon Associate bookstream.io earns from qualifying purchases

All books by Mercedes Lackey  ❯