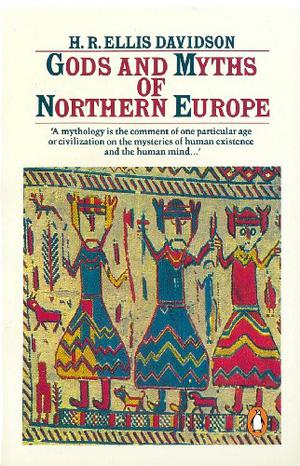 Gods and Myths of Northern Europe

Tiw, Woden, Thunor, Frig. these ancient northern deities gave their names to the very days of our week. Nevertheless, most of us know far more of Mars, Mercury, Jupiter, Venus, and the classical deities. Recent researches in archaeology and mythology have added to what was already a fairly consistent picture (largely derived from a twelfth-century Icelandic account) of the principal Scandinavian gods and goddesses. This new study - the first popular treatment of the subject to appear in English for many years - is the work of a scholar who has long specialized in Norse and Germanic mythology. She describes the more familiar gods of war, of fertility, of the sky and the sea and the dead, and also discusses those puzzling figures of Norse mythology - Heimdall, Balder, and Loki.

All these deities were worshipped in the Viking Age, and the author has endeavoured to relate their cults to daily life and to see why these pagan beliefs gave way in time to the Christian faith.

Similar books to 'Gods and Myths of Northern Europe'

More books like 'Gods and Myths of Northern Europe'   ❯

Buy 'Gods and Myths of Northern Europe' from the following stores: