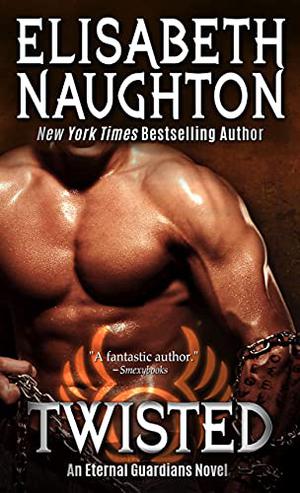 NICK – Leader of the half-breeds and the last true hero. He’s spent his life fighting a dark pull. One he now knows is linked to his father and ultimate evil.

But Nick’s hidden powers are coveted by more than just his father. Imprisoned by his enemies, Nick battles every form of torture imaginable as they try to break him. Only one thing is keeping him sane. One woman who gives him the strength to fight the relentless darkness. She has a dangerous plan of her own, though, and as Nick’s powers grow stronger, even she might not be enough to alter his destiny.

As the fate of the world hangs in the balance, Nick’s allegiances are tested. And no one knows whether he will choose to fight for good or succumb to the sinister lure of evil. Not even him.
more
Bookmark Rate Book
Amazon Other stores
As an Amazon Associate bookstream.io earns from qualifying purchases

All books by Elisabeth Naughton  ❯

Buy 'Twisted' from the following stores: