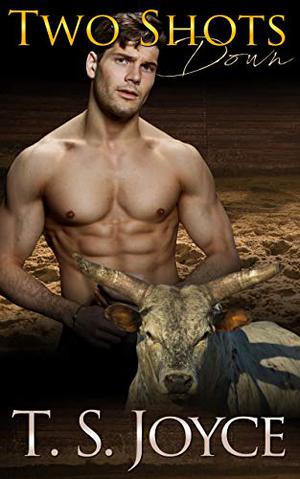 Two Shots Down (Battle of the Bulls #1)

Two Shots Down is blazing his way up the ranks as one of the top bull shifters in the Pro Bull Shifter Riding Circuit. He has a chip on his shoulder a mile wide, and everything to prove. With a dark reputation as a cowboy killer, he has wrecked every interview he’s done in his career. He’s the bull shifter everyone loves to hate, and he’s just fine with that, except there is one he cares about. One woman whose life he ruined. One woman he damaged. One woman who probably doesn’t even know he exists. When that one woman stands up for him and the other top three bull shifters of the circuit, and offers to manage them, he knows he’s in for a bad time. She drags ghosts with her, and they’re haunting him. All he needs to do is get from event to event, and buck those riders off before that eight second mark. But during the most important time of his career, Cheyenne is tearing down his walls. And for the life of him, he can’t figure out if that’s a good thing, or a very, very bad thing.

Cheyenne left the PBSR years ago when tragedy altered her life forever. She used to represent the riders, but now she’s turning traitor and switching sides. She’s taking heat from everyone to represent three titan bull shifters who don’t even understand what she’s trying to do for them, and want nothing to do with her. She’s in way over her head, but she did this on purpose, to get to know the man who demolished her life all those years ago. She needs to know if Two Shots Down is really the monster he pretends to be, or if he might be the only other person on earth who could understand what she’s healing from. These bull shifters are rough, and violent, and intimidating, but Two Shots Down is showing her a softer side to the bulls. He’s funny, and caring, and protective of her always, and sexy as hell. The more time she spends with her, the safer she feels with the monster.

Now it’s up to Two Shots Down. If he wants to be a part of Cheyenne’s team, he has to win events…and that means being the biggest, baddest bucker in the world.
more
Bookmark Rate Book
Amazon Other stores
As an Amazon Associate bookstream.io earns from qualifying purchases

The 'Battle of the Bulls' series

Similar books to 'Two Shots Down'

Buy 'Two Shots Down' from the following stores: