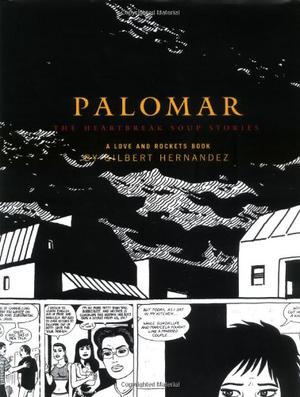 For the first time ever, Fantagraphics is proud to present a single-volume collection of Gilbert Hernandez's "Heartbreak Soup" stories from Love & Rockets, which along with RAW magazine defined the modern literary comics movement of the post-underground generation. This massive volume collects every "Heartbreak Soup" story from 1993 to 2002 in one 500-page deluxe hardcover edition, presenting the epic for the first time as the single novel it was always intended to be. Palomar is the mythical Central American town where the "Heartbreak Soup" stories take place. The stories weave in and out of the town's entire population, crafting an intricate tapestry of Latin American experience. Hernandez's densely plotted and deeply imagined tales are often compared with magic realist authors like Gabriel Garcia Marquez and Isabel Allende (House of the Spirits). His depictions of women and Mexican-American experience have been universally lauded as the best examples the artform has to offer. Luba, the guiding spirit of Palomar since the outset, has been hailed by The Nation, Rolling Stone, and Time magazine as one of the great characters of contemporary American fiction. Hernandez's work, in addition to the obvious magic realist comparisons, shares an affinity with other Latin American and Spanish writer/artists, like Frida Kahlo, Federico Garcia Lorca and Pablo Picasso, all of whom applied a surrealist eye to what they saw and experienced. Palomar follows the lives of its residents from Luba's arrival in the town to her exit, twenty years later. Included are such classic tales as "Sopa de Gran Pena," "Ecce Homo," "An American in Palomar," "Human Diastrophism," and "Farewell, Mi Palomar." Palomar presents one of the richest accomplishments in the history of the artform in its ideal format for the first time, making it a must-have for longtime Love & Rockets fans and new readers alike.
more
Bookmark Rate Book
Amazon Other stores
As an Amazon Associate bookstream.io earns from qualifying purchases

All books by Gilbert Hernández  ❯

Buy 'Palomar: The Heartbreak Soup Stories' from the following stores: