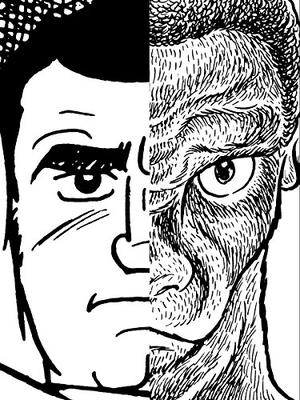 It may or may not be contagious. There seems to be no cure for it. Yet, Monmow Disease, a life-threatening condition that transforms a person into a dog-like beast, is not the only villain in this shocking triumph of a medical thriller by manga-god Osamu Tezuka. Said to have been the personal favorite of the artist, who held a degree in medicine, and surprisingly attentive to Christian themes and imagery, Ode to Kirihito demolishes naive notions about human nature and health and likely preconceptions about the comics master himself.

From pregnant vistas of the Japanese countryside to closed rooms full of sin and redemption, Tezuka astounds for more than eight hundred continuous pages, his art in turn easefully concise and flamboyantly experimental, his inquiry into our most repugnant instincts and prospects for overcoming them unflinchingly serious. Incorporating elements of the often lurid and adult-oriented “gekiga” style for the first time, Tezuka entered into his fruitful late period with this work.

A promising young doctor, Kirihito Osanai visits a remote Japanese mountain village to investigate the source of the latest medical mystery. While he ends up traveling the world to discover what it takes to be cured of such a disease, a conspiracy back home attempts to explain away his absence. Hinging upon his fate are those of his loved ones: an unstable childhood friend and colleague trapped between factions of the medical establishment that nurtured him; a fiancée emotionally transformed by Kirihito’s mysterious disappearance; and a stranger who becomes his guardian angel, a sensual circus-act performer with volatile psychological secrets.

From plutocratic Taipei and racially divided South Africa to backwater Arabia and modern Osaka, ambition and desire beckon “normal men” to behave uglier than any beast. Riveting our attention on deformity and its acceptance like The Elephant Man by David Lynch, Ode to Kirihito examines the true worth of human beings through and beyond appearances.
more
Bookmark Rate Book
Amazon Other stores
As an Amazon Associate bookstream.io earns from qualifying purchases

Similar books to 'Ode to Kirihito'

All books by Osamu Tezuka  ❯

Buy 'Ode to Kirihito' from the following stores: