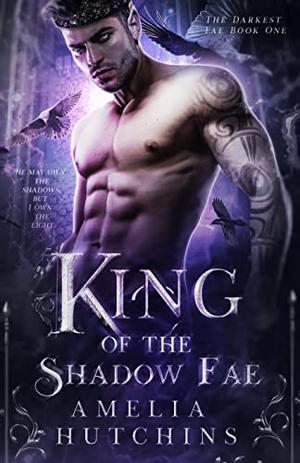 King of the Shadow Fae (The Darkest Fae #1)

New from USA Today Bestselling Author Amelia Hutchins comes a new Dark Urban Fantasy that will have you begging for more. Spellbinding, action-packed, mystery, and romance.

I’d trained my entire life to take over the hunter guild. When the unthinkable happened, my father was taken, and I was forced to step up. The moment I took control, everything began to unravel around me. The transition should have gone smoothly, and it would have if Kieran Knight hadn’t shown up. He’s an egotistical maniac with a secret agenda and a psychotic need to possess and control me. There’s one thing Kieran didn’t count on, though. No one owned me. There’s too much at stake to allow myself to be influenced or for him to stand in my way.

Just when I thought I had everything under control, our enemies attacked the hunter guild from every angle, and my whole world was kicked out from beneath me. Everything I thought I knew was now questioned, and I didn’t know who could be trusted or where to turn. To make matters worse, Kieran had his hand in the pockets of every Immortal House in town, preventing my allies from helping me find my dad and from discovering why bodies from Otherworld creatures were piling up at dumpsites around town.

I may have been played at every turn, but now I know the truth, and I intended to show the world what one pissed-off hunter would do when the odds were against her. I’m Xariana Anderson, and I came into this world fighting, and I’ll leave the same way if I’m forced to do so.
more
Bookmark Rate Book
Amazon Other stores
As an Amazon Associate bookstream.io earns from qualifying purchases

The 'The Darkest Fae' series

Similar books to 'King of the Shadow Fae'

More books like 'King of the Shadow Fae'   ❯

All books by Amelia Hutchins  ❯

Buy 'King of the Shadow Fae' from the following stores: