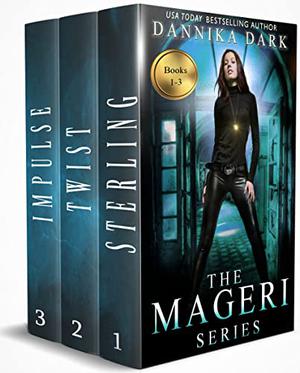 After Zoe Merrick is transformed into an immortal, she is faced with finding her place in an unfamiliar world. But she is not alone. Zoe must learn to trust the new men in her life that are friends, protectors, and companions.

But only one will be her lover.

STERLING
Zoë Merrick lived an ordinary life until late one night, she was brutally attacked and left for dead.

She survived, saved by a stranger who witnessed her undergo a physical transformation. That's not the only thing that's different. Zoë is unable to control an unexplainable energy coursing through her body.

Justus De Gradi is a man who can teach her that control. He's handsome, arrogant, and not entirely human. He reveals that she is a Mage - an immortal made of light, not magic. She must now make a choice: Rebuild her life in the human world with the man who saved her, or live with Justus and learn how to use her extraordinary gifts. Justus has sworn an oath to protect her life, but can he guard her from the one man who has a right to claim it?

Zoë learns the price of freedom...
and the value of loyalty.

TWIST
Months after moving to the mysterious city of Cognito, Silver is developing her gifts as a Mage and learning how to live under new laws. She is forced to give up her old life and live in secret among the humans. There is finally hope of leading an ordinary life . . .

Until Logan Cross walks into it.

Their chance meeting leads her close to discovering the identity of the nameless Mage who once stole her light and discovered the unique power she possesses. That knowledge poses an unimaginable threat to Silver, fueling the search to find out who he is before he finds her.

Lives are at stake. Truths are revealed. And an unexpected passion ignites.

IMPULSE
Almost one year ago, a Mage attacked Silver and changed the course of her destiny.
Immortals exist, and now she is one of them.

Within the dark and supernatural city of Cognito, Silver is living under the watchful eye of her Ghuardian and dating her mortal enemy. Neither man can protect her from a dark secret, one buried within the contents of a box. As rival factions struggle to gain control, she finds herself in the middle of a centuries-old feud that threatens to drive a wedge between her and Logan Cross, the man who intends to seduce her.

In an explosive turn of events, one life is saved and another is forever altered. Can Silver trust those around her, or are they hiding a dark secret of their own?

The Alpha
The Alpha
(Black Arrowhead #2)

The Vow
The Vow
(Black Arrowhead #1)

All books by Dannika Dark  ❯

Buy 'The Mageri Series Box Set' from the following stores: