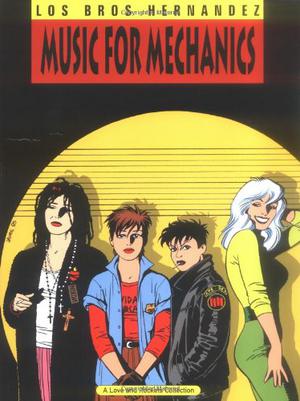 Music for Mechanics (Love and Rockets #1)

The original, seminal Love & Rockets comic book series, which ran for 50 issues from 1981 to 1996, singlehandedly defined the post-underground generation of comics that spawned Daniel Clowes, Chris Ware, and so many others. Now collected into 15 volumes, Love & Rockets is a body of work that The Nation has described as "one of the hidden treasures of our impoverished culture." Created by brothers Gilbert, Jaime, and Mario Hernandez, three Southern California Mexican-Americans armed with a passion for pop culture and punk rock, Love & Rockets gave a voice to minorities and women for the first time in the medium's then 50-year history and remains one of the greatest achievements in comic book history.
more
Bookmark Rate Book
Amazon Other stores
As an Amazon Associate bookstream.io earns from qualifying purchases

The 'Love and Rockets' series

Similar books to 'Music for Mechanics'

All books by Gilbert Hernández  ❯

Buy 'Music for Mechanics' from the following stores: