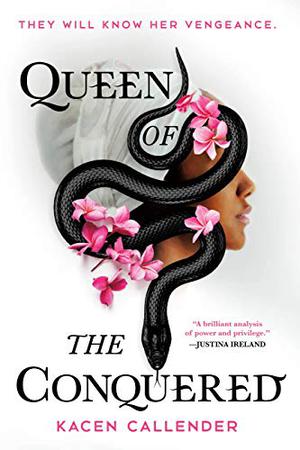 Queen of the Conquered (Islands of Blood and Storm #1)

An ambitious young woman with the power to control minds seeks vengeance against the royals who murdered her family, in a Caribbean-inspired fantasy world embattled by colonial oppression.

Sigourney Rose is the only surviving daughter of a noble lineage on the islands of Hans Lollik. When she was a child, her family was murdered by the islands’ colonizers, who have massacred and enslaved generations of her people—and now, Sigourney is ready to exact her revenge.

When the childless king of the islands declares that he will choose his successor from amongst eligible noble families, Sigourney uses her ability to read and control minds to manipulate her way onto the royal island and into the ranks of the ruling colonizers. But when she arrives, prepared to fight for control of all the islands, Sigourney finds herself the target of a dangerous, unknown magic.

Someone is killing off the ruling families to clear a path to the throne. As the bodies pile up and all eyes regard her with suspicion, Sigourney must find allies among her prey and the murderer among her peers... lest she become the next victim.

Queen of the Conquered reckons with the many layers of power and privilege in a lush fantasy world—perfect for readers of V. E. Schwab, Kiersten White, and Marlon James.
more
Bookmark Rate Book
Amazon Other stores
As an Amazon Associate bookstream.io earns from qualifying purchases

The 'Islands of Blood and Storm' series

Similar books to 'Queen of the Conquered'

Buy 'Queen of the Conquered' from the following stores: