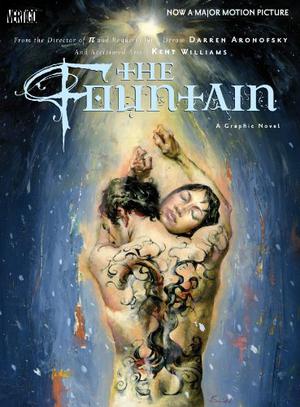 Darren Aronofsky, the critically acclaimed filmmaker behind Pi and Requiem for a Dream), united with award-winning painter Kent Williams (Blood: A Tale, Havok/Wolverine: Meltdown) to create a beautiful and haunting graphic novel as an insider's accompaniment to director's most ambitious movie yet: The Fountain.

An odyssey about one man's thousand-year struggle to save the woman he loves, The Fountain follows Thomas as he feverishly travels through three distinct eras: as a 16th century conquistador battling a fierce Mayan army, as a present-day scientist searching for a cure for his wife's mortal disease and as a future explorer seeking to uncover the secrets of a dying star.

The Fountain graphic novel is a sister-project to the film, using the same story as its seed, but stretched instead upon the limitless canvas of the comics medium. Already earning Williams the Eisner nomination for Best Painter, The Fountain graphic novel provides an alternative interpretation wholly unique yet still intimately tied to the movie, in what can be considered the ultimate "director's cut".

Similar books to 'The Fountain'

Buy 'The Fountain' from the following stores: