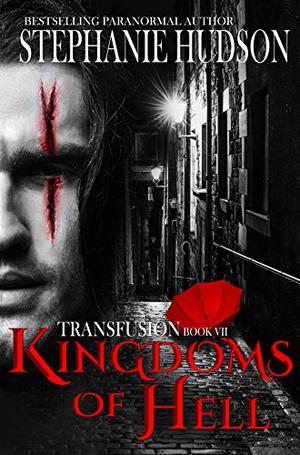 A ‘date’ he said.
Just one date with a Vampire King who had been hunting me down for months…what could go wrong, right?
One picnic, one witch, an ex-girlfriend out for my blood, and an army of zombie vampire rogues later, and what I had was an ‘Alice in Wonderland’ style cocktail for disaster!
Because this Alice was about to have the mind trip of her life when peeking through the keyhole of Lucius’ memories. All before falling down a rabbit hole to Hell, where the bunnies were more likely to stab you with a carrot before eating your soul!
But hey, it’s not like I had just been dumped in the middle of a Hellish battle with nothing but my wits to survive it,
Oh no, wait…
That had happened.
And one other thing that was sure to happen when Lucius finally found me in Hell…

He was going to kill me!
more
Bookmark Rate Book
Amazon Other stores
As an Amazon Associate bookstream.io earns from qualifying purchases

Similar books to 'Kingdoms Of Hell'

All books by Stephanie Hudson  ❯

Buy 'Kingdoms Of Hell' from the following stores: